In this article, I have listed the Top Most important and frequently asked basic Networking Interview Questions and Answers with pictorial representation for your easy understanding and remembrance. Which, in turn, will strive you towards success steps in your career. A list of top frequently asked networking interview questions and answers are given below. 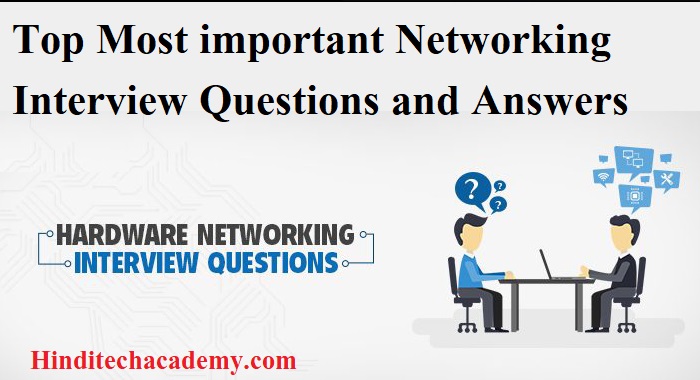 2) What do you mean by network topology?

Network topology specifies the layout of a computer network. It shows how devices and cables are connected to each other. The types of topologies are:

3) What are the advantages of Distributed Processing?

4) What is the criteria to check the network reliability?

The reliability of a network can be measured by the following factors:

5) Which are the different factors that affect the security of a network?

6) Which are the different factors that affect the reliability of a network?

The following factors affect the reliability of a network:

7) Which are the different factors that affect the performance of a network?

The following factors affect the performance of a network:

8) What makes a network effective and efficient?

There are mainly two criteria which make a network effective and efficient:

11) What is a gateway? Is there any difference between a gateway and router?

A node that is connected to two or more networks is commonly known as a gateway. It is also known as a router. It is used to forward messages from one network to another. Both the gateway and router regulate the traffic in the network.

Differences between gateway and router:

DNS is an acronym stands for Domain Name System.

16) What is NOS in computer networking?

17) What are the different types of networks?

Networks can be divided on the basis of area of distribution. For example:

POP3 stands for Post Office Protocol version3. POP is responsible for accessing the mail service on a client machine. POP3 works on two models such as Delete mode and Keep mode.

19) What do you understand by MAC address?

IP address is a unique 32 bit software address of a computer in a network system.

21) What is private IP address?

There are three ranges of IP addresses that have been reserved for IP addresses. They are not valid for use on the internet. If you want to access internet on these private IPs, you must have to use proxy server or NAT server.

22) What is public IP address?

A public IP address is an address taken by the Internet Service Provider which facilitates you to communication on the internet.

APIPA is an acronym stands for Automatic Private IP Addressing. This feature is generally found in Microsoft operating system.

Anonymous FTP is used to grant users access to files in public servers. Users which are allowed access to data in these servers do not need to identify themselves, but instead log in as an anonymous guest.

A protocol is a set of rules which is used to govern all the aspects of information communication.

28) What are the main elements of a protocol?

The main elements of a protocol are:

29 What is the Domain Name System?

There are two types of client/server programs. First is directly used by the users and the second supports application programs.

The Domain Name System is the second type supporting program that is used by other programs such as to find the IP address of an e-mail recipient.

A link is connectivity between two devices which includes the cables and protocols used in order to make communication between devices.

31) How many layers are in OSI reference model?

There are 7 layers in the OSI reference model.

32) What is the usage of OSI physical layer?

The OSI physical layer is used to convert data bits into electrical signals and vice versa. On this layer, network devices and cable types are considered and setup.

OSI session layer provides the protocols and means for two devices on the network to communicate with each other by holding a session. This layer is responsible for setting up the session, managing information exchange during the session, and tear-down process upon termination of the session.

34) What is the maximum length allowed for a UTP cable?

36) What do you understand by TCP/IP?

TCP/IP is short for Transmission Control Protocol /Internet protocol. It is a set of protocol layers that is designed for exchanging data on different types of networks.

The “netstat” is a command line utility program. It gives useful information about the current TCP/IP setting of a connection.

38) What do you understand by ping command?

The “ping” is a utility program that allows you to check the connectivity between the network devices. You can ping devices using its IP address or name.

Sneakernet is the earliest form of networking where the data is physically transported using removable media.

The processes on each machine that communicate at a given layer are called peer-peer process.

41) What is a congested switch?

A switch receives packets faster than the shared link. It can accommodate and stores in its memory, for an extended period of time, then the switch will eventually run out of buffer space, and some packets will have to be dropped. This state is called a congested state.

42) What is multiplexing in networking?

In Networking, multiplexing is the set of techniques that is used to allow the simultaneous transmission of multiple signals across a single data link.

43) What are the advantages of address sharing?

Address sharing provides security benefit instead of routing. That’s because host PCs on the Internet can only see the public IP address of the external interface on the computer that provides address translation and not the private IP addresses on the internal network.

RSA is short for Rivest-Shamir-Adleman algorithm. It is mostly used for public key encryption.

There are basic 4 layers in TCP/IP:

46) What is the difference between TCP/IP model and the OSI model?

Following are the differences between the TCP/IP model and OSI model:

47) What is the difference between domain and workgroup?

What is an IP Address-IP Address क्या है?

What is Computer Network in Hindi- कम्प्यूटर नेटवर्क क्या है?